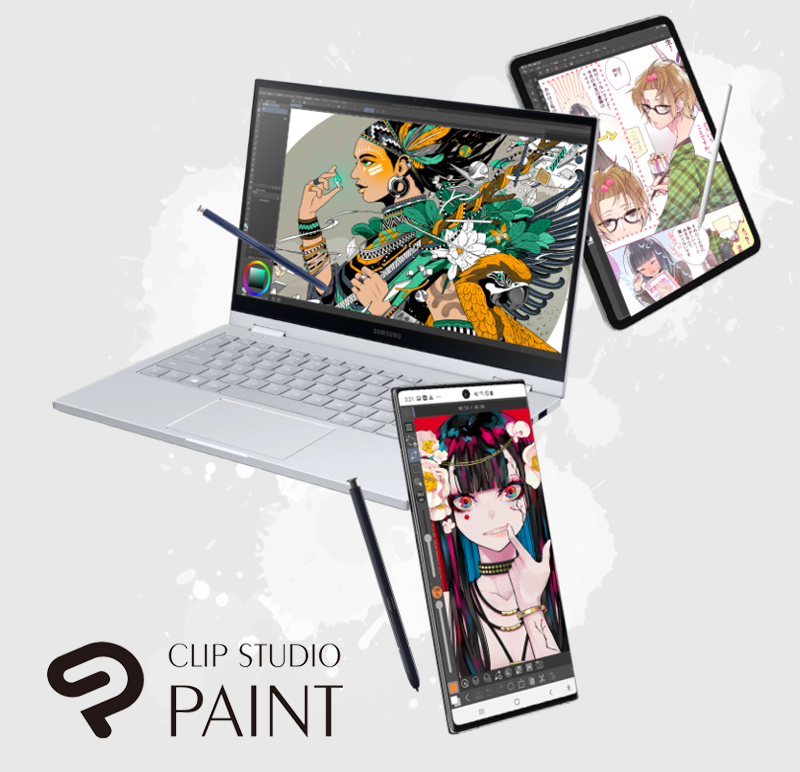 Since its launch in 2012, more than 25 million people have used this paint app. In addition to the Japanese language version, English, Korean, Traditional Chinese, Simplified Chinese, French, Spanish and German are also available.The app with its enjoyable drawing feel and an abundance of features is loved by artists from around the world. In addition to the Windows, macOS, iPad, iPhone, and Galaxy versions, the Android and Chromebook versions were released in December 2020, allowing users to create professional graphic content on any device.

Top sales and market share in the graphics software market

Winner of the 2015/2016/2017/2019 "BCN Award" in the graphics software category, calculated by sales data on Amazon and other mass retailers.It is also the most popular app among users of pixiv, the world's largest social media service for artists with over 40 million users.*

Trusted by the World’s Leading Brands

As well as being bundled with the world’s bestselling pen tablets from Wacom and major computer manufacturers including VAIO and Toshiba, Clip Studio Paint now comes pre-loaded on the latest Galaxy Andriod tablets sold all around the world.

Used in professional fields and schools

CLIP STUDIO PAINT is used by many professional graphics content creators, including illustrators, manga artists and animation studios. It is also used in classes at over 50 universities and other specialist schools.

CLIP STUDIO TABMATE is a wireless controller that can be used with pen tablets and tablet PCs to create illustrations, manga, and animation more comfortably on CLIP STUDIO PAINT. By configuring the settings of each button, frequently used features can be executed with a single action.

An all-in-one package containing the RETAS series, the de facto standard animation production app which is used by many animation producers, along with a guidebook and sample materials.

RETAS STUDIO *Only available in Japanese

* Most popular app among users of pixiv.(Calculated by CELSYS from figures provided by pixiv Dec 2015 - Dec 2021)