40% of digital creators start digital art at the age of 15 or younger Survey of 6,000 European creators

CELSYS, Inc., the developer and distributor of drawing app for creators “Clip Studio Paint,” conducted a survey of on the creative activities of 6,000 visual art creators(*1) in four European countries (the UK, France, Germany, and Spain) from August to October 2022. The survey was conducted in the form of an online questionnaire, and responses were received from a total of 6,000 people in each country, with 500 respondents from each age group from 10s to 30s.

In the survey, 69.6% of creators said they draw digitally, and 43.4% of digital artists started at the age of 15 or younger.

・Each country has different levels of digital adoption
・43.4% of digital artists started digital art at the age of 15 or younger, and 13.0% at age 10 or younger, showing a familiarity with digital drawing since childhood
・Tablets and smartphones were the majority of first devices for digital art, as easily accessible devices 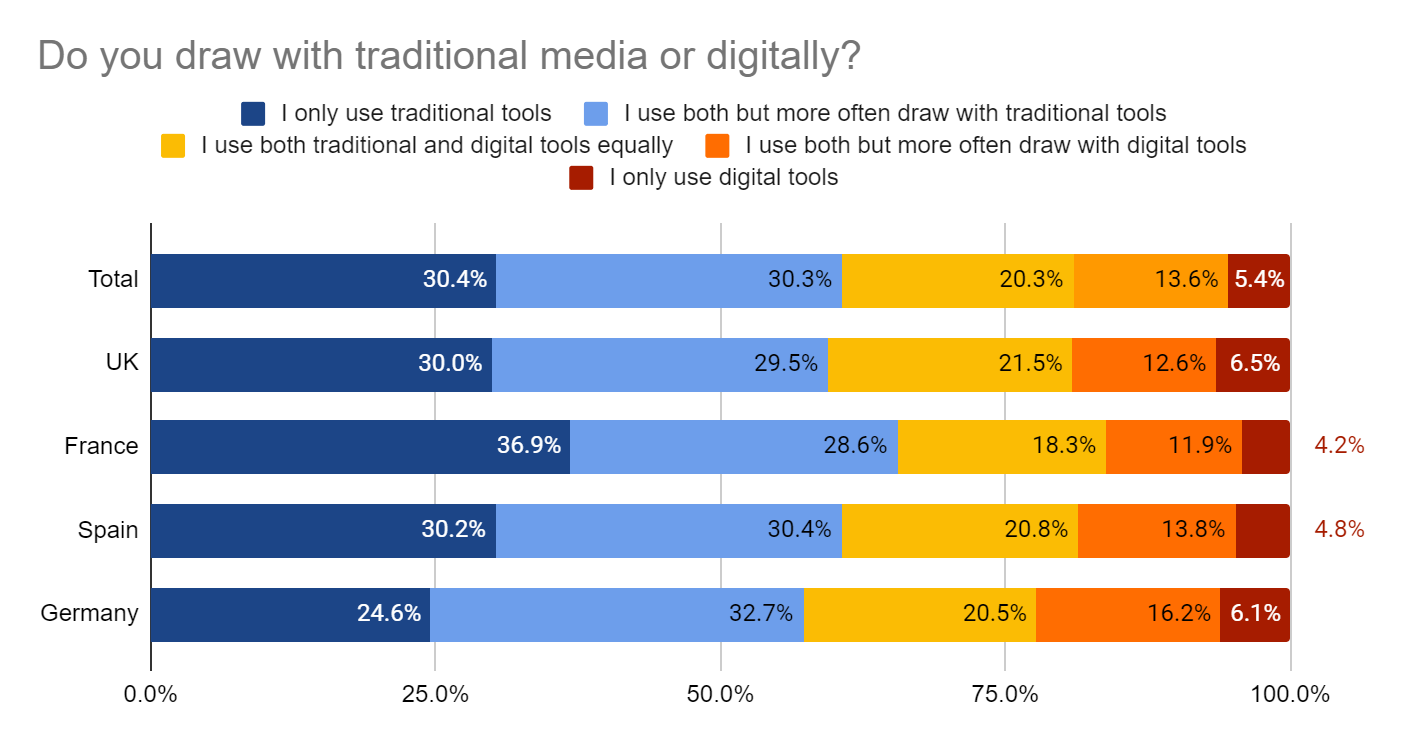 43.4% of digital artists started digital art at the age of 15 or younger, and 13.0% at age 10 or younger
The survey also asked at which age creators first created digitally (Figure 2). The age with the highest number of respondents was 15 years old, with an average of 17.1 years old. 43.4% of respondents indicated that the age at which they first drew digitally was 15 or younger, and 13.0% were 10 or younger.

By country, there is a difference of about two years in the average age at which people start digital art between France (18.1 years old) and Spain (16.0 years old), with digital tools being used at a much younger age in Spain.

In recent years, many creators are already drawing digitally in their teens, which means that the acquisition of drawing skills and digital literacy is occurring simultaneously. The fact that they are starting to draw digitally at a young age indicates that their parents are supporting them by providing devices and learning to use tools.

Tablets and smartphones were the majority of first devices for digital art
The majority of first-time digital drawings were done on devices other than PCs (57.3%), with Android smartphones and iPads being the most common among these devices (Figure 3). Among mobile devices, Android smartphones were most frequently used to draw with fingers (Figure 4). This indicates that many people are starting digital art not with dedicated equipment, but first with household mobile devices that are close at hand.

In terms of devices currently used by creators, iPad + Apple Pencil, computer + pen tablet, and computer with touchscreen + stylus are the most common combinations (Figure 5). The large number of tablets and smartphones also indicates that mobile devices are being widely utilized by digital creators. 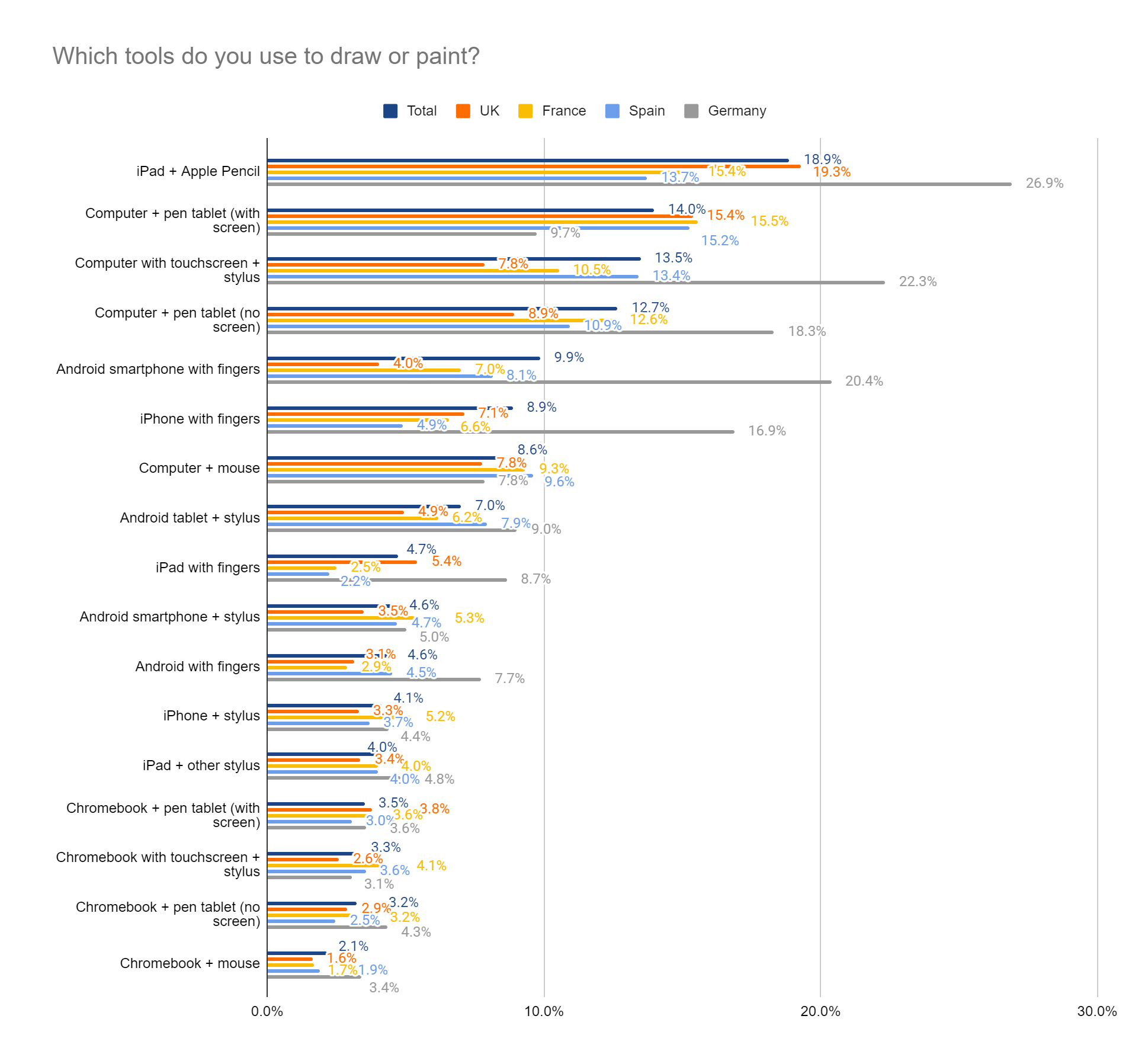 The results of this survey show that young people up to their early teens are stepping into digital art, which has traditionally been considered to require high-spec equipment, with household devices. This suggests that digital creation will continue to become more accessible. At the same time, there is an increasing need for content that supports the acquisition of digital literacy and techniques and knowledge related to drawing so that these young beginner artists can continue to grow and enjoy creative expression.

Celsys has been supporting creators globally in the production of digital art using its technology for more than 30 years. The drawing app “Clip Studio Paint” is used by more than 25 million people worldwide(*2) for the creation of illustrations, comics, webtoons, and animation. Available on PC, tablet, and smartphone, the app offers a full-featured drawing experience on all devices. Celsys supports creators in publishing their artwork by holding contests such as the International Comic/Manga School Contest and International Illustration Contest.

The company will continue to nurture an environment that supports digital creators from beginners to professionals, such as providing easy-to-use drawing apps, content to help people learn more about digital art, and places for creators to interact with each other.


*1 People who answered that they had drawn in the last 30 days
*2 Includes free trial users and downloads of the iPad, iPhone, Galaxy, Android, and Chromebook versions.